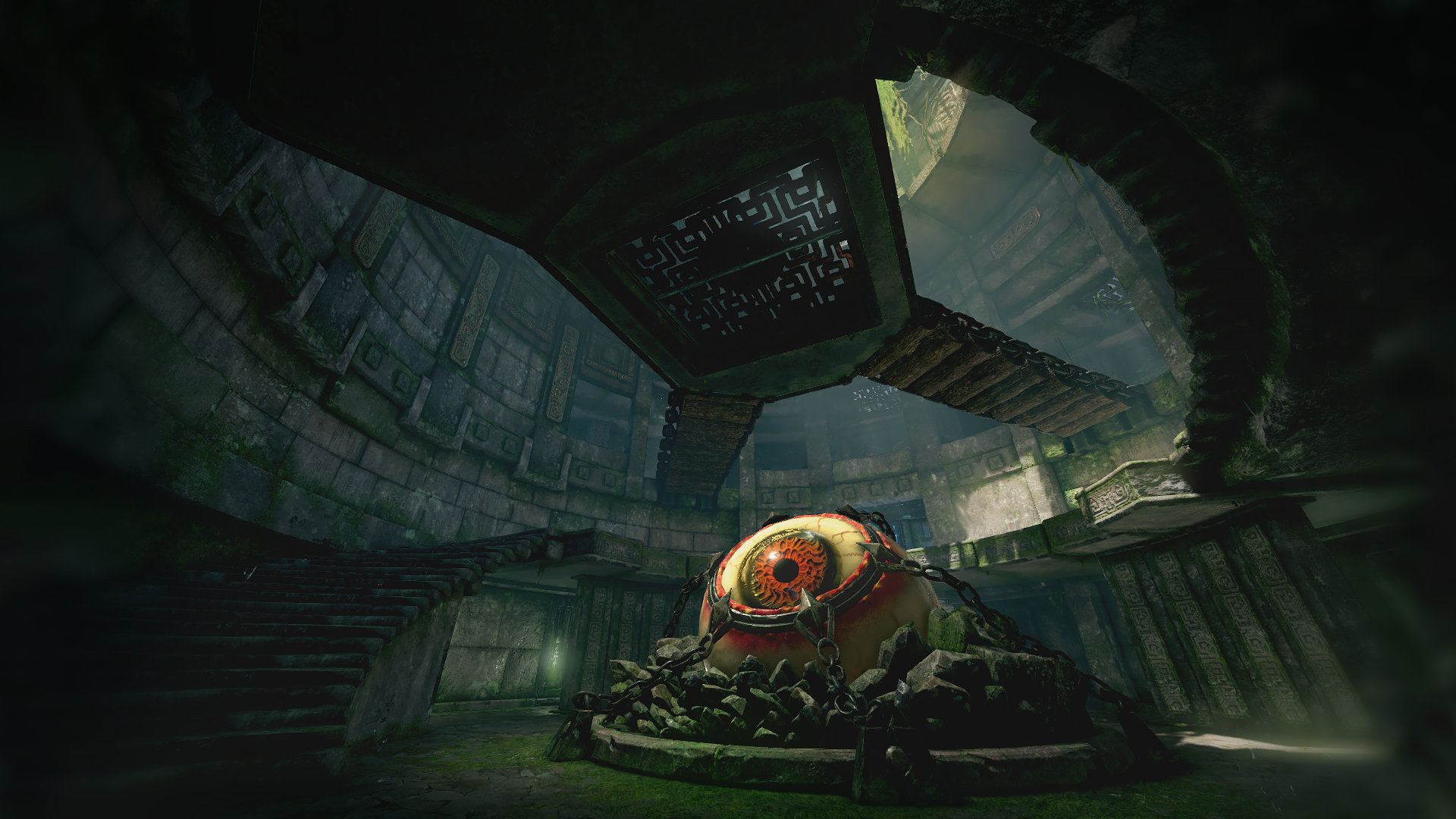 Untold epochs have passed since the slime-slick stairs were heaved upward from their inky depths, to be swabbed by the tears of tribute.

The watchful Eye of the Elder God Cthalha sits underneath alternating Quad Damage and Protection powerups. Even when the major powerups are on their two-minute cooldown, you’ll still want to hold onto this room to control the Mega Health and easily restock the Rocket Launcher.

This room grants access to all other areas on the map—which makes it vulnerable to attack on all sides.

This open area is dominated by a mask-like statue of Cthalha’s face. (Did you notice one of her ruby eyes is missing?) It is also notable for the T-shaped pillar that can be used for cover from enemies in the Sluiceway. You can fill up your stack with two health bubbles (and some cooldown hourglasses) behind the jump pad, and a Light Armor just above. A Heavy Machine Gun pickup is tucked away in the far corner.

Pick up the Lightning Gun in this area, along with a few other resources. You can pick up some ammo and health here before using the jump pad to pop up behind cover at the base of the Ziggurat (making it one of the safest places to enter from); or take the teleporter near the stairs for a surprise assault.

You’ll find the Railgun in the Sluiceway just nearby.

The Railgun awaits in this tall two-story room between the Statue of Cthalha and the Ziggurat. The Sluiceway offers an alternate connection to the Lightning Gun Curve and down into the Cistern.

Featuring the Heavy Armor in the center of the room, the Cistern is a dangerous area that allows quick transit to most of the arena. A jump pad will lead you directly onto the high ground in the Ziggurat and allow you to grab some cooldown hourglasses, but the high arc of the jump leaves you susceptible to Railgun shots.

A simple-but-important room that can teleport you to the upper level of the Eye of Cthalha. The Tri-bolt rests here on a stone pedestal.

One of the central areas in the ruins is home to a Super Nailgun, Super Shotgun, and a Light Armor. Defenders will want to try and use the high ground to neutralize the effects of the Rocket Launcher, while attackers may want to coordinate entering through several entrances in order to split defender attention. The two jump pads in provide entrances with some cover, although care must be taken when trying to enter from the Cistern as it is a bit more tight and susceptible to splash damage.