A wide variety of weapons are available to players. At the beginning of every match, all combatants start with a melee weapon, the Gauntlet, and their choice of a Machinegun, Shotgun, or Nailgun. These starting weapons give the player some offensive capabilities, but aren’t enough alone to be a destructive force. Players need to seek out additional weapons which are scattered throughout the arena. Collect weapons and ammunition by running over them. Ammo boxes can be found throughout the arena when you are running low on ammunition. 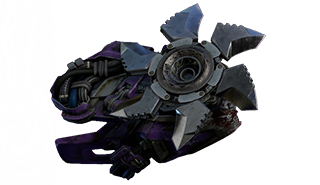 The gauntlet combines a whirling saw blade with a powerful electrical charge to create a deadly close-combat weapon. Unlike the other weapons, the gauntlet needs no ammunition, so it’s always ready to go. Use it while sneaking up behind an opponent or surprise them while in close range combat. The gauntlet is a starting weapon available immediately upon spawning.

The Machinegun is a basic starting weapon. Effective at all ranges, the Machinegun will test your ability to track targets. Keep your opponents in a medium range for best results or use at long distances to counter Railgun fire if needed.

The starting Shotgun only has one barrel, compared to the double-barreled version you will find in the arena. Shotguns are typically close range, and this one is no exception. Do not run out into open areas while looking for something better, and take advantage of its single shot nature by popping out around corners.

One of the oldest weapons in the Arena, the Nailgun fires nails at a high velocity. The Nailgun will reward those with the ability to lead enemies effectively with the highest rate of damage of all starting weapons.

The Heavy Machinegun has an increased firerate and damage over the starting variety, but the same properties still apply. Compared to the Lightning Gun, the spread on the HMG allows for a little more leniency in aiming in exchange for lower damage, but with the added ability of being able to return fire against champions at long range.

When an enemy is very low on health, you can choose to zoom in for slightly more damage per bullet in exchange for a lower rate of fire. The lower rate of fire may not be ideal for most encounters, but it is a great way to finish an opponent off.

If you feel the enemy is close to death, consider switching to the Super Shotgun to finish them off. Dealing out high damage at close range may be easier than trying to hit a rocket on someone running away, or taking a risky Railgun shot.

Knowing your enemy’s health and armor can be critical to successful use of the Super Shotgun.

Although the Super Nailgun is perhaps the hardest weapon to use, treat it with respect as it boasts the highest rate of damage of all weapons in the Arena. As with the Nailgun, predicting your enemy’s movements is the only way to maximize your damage output.

The Tri-bolt fires three time-delayed projectiles that explode shortly after impact. It is especially adept at laying traps and area denial.

Players who can track their opponents using the Lightning Gun will quickly learn how powerful this weapon can be. Holding the lightning shaft against an opponent while they are airborne can inflict massive amounts of damage, while also inflicting a push back effect on them pinning them in the air.

This is the Rocket Launcher. Most weapons require you to hit your opponents directly, but rockets explode when they hit anything, which can cause damage to nearby players, including you. While extremely common in direct encounters, being able to predict where an opponent might appear can give you the advantage in combat. Another great use for the rocket launcher is rocket jumping, an advanced movement technique that allows you to reach great heights for a surprise attacks or advanced level maneuvering.

The Railgun rewards precision with high damage, and punishes carelessness with a long reload time. Do not use the Railgun in close combat, unless you are positive of the outcome, as missing will leave you vulnerable while the gun cools down. Deny your opponents crucial armor and powerups by taking aim from a distance with minimal chance of retribution.