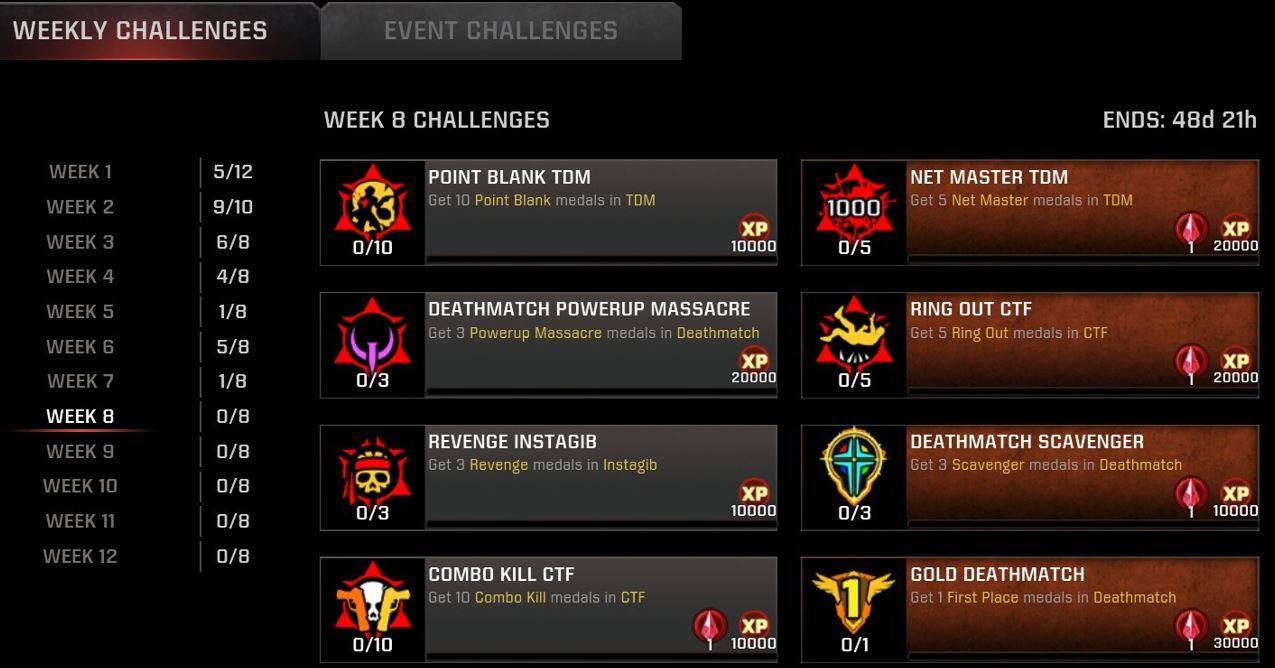 Hello, and good evening Quakers! Season 13 is now in full swing at this point, and Week 8 of our weekly challenges are live. Quick note a vote on discord has decided a new PTS update will arrive tomorrow, so keep your eyes peeled for that. In any case whenever that new update rolls to the main server the 25TH Anniversary Banners are going to be removed (so, take your screenshots now), Bots are getting smarter, and multiple maps are getting small changes. Most recent PTS patch notes will be at the bottom.

Also in case you missed it Quake Pro League is back THIS SATURDAY FEBURARY 5TH AT 10 AM EAST | 4PM CEST.

You can read more about it in the article we wrote here.

If you are not already familiar Quake Champions has 4 Seasons a year that also correspond with the Battlepass. Meaning we have 4 10 to 12 week long Battlepasses a year. Note the right side of the BP does not open up until you buy the BP. 48 DAYS REMAIN FOR SEASON 13.

The Czech Quake Community has made us a BattlePass Challenges Tracker over on their website: www.quake.pub Also check out their Tournament Calendar on the Right of their page, Live twitter feed on left, and newly added interviews in the center. The Quake Pub also shows Streamers for our community, and a Tournament Calendar that it is current.

Have your guard up as this week asks you to descend into the ARENAS alone in 3 DeathMatch Challenges, so make sure to add it to your Q’s.

Bethesda NET Forums have officially been replaced with discord. DO NOT WORRY as this was completely planned, and its replacements have been up and running for years now really. All Bethesda/ZeniMax forums will now be part of the software APP "Discord" which is probably already part of most gamer’s arsenal. We are very lucky as we are one of the only Bethesda/ZeniMax communities to have an official server completely dedicated to our Game series of choice QUAKE.

all bugs need to be posted in the "bug-reports" channel under the "QC FEEDBACK" header in the official discord. link to that channel here: discord.gg/uy3VBbd83f Clips, or screenshots of your issue are very useful for the developers.

The PTS is a Public Test Server that many games come with. It is completely optional to be part of the PTS, and does require an additional download to take part of. The purpose of the PTS for the player is it allows us to preview upcoming skins, arenas, and gameplay changes in general before they are added to the main game. It also doubles as bug testing. In fact all bugs, or issues in the PTS should be put in the official discord here: discord.gg/gSRRbCQQgM In the "public-test-server" channel. If you can you should try and find a buddy to test with. Two heads are better than one. You can find people to party with in the "party-finder" channel of the official discord. Channel Link Here: discord.gg/yPjxKX4k2q