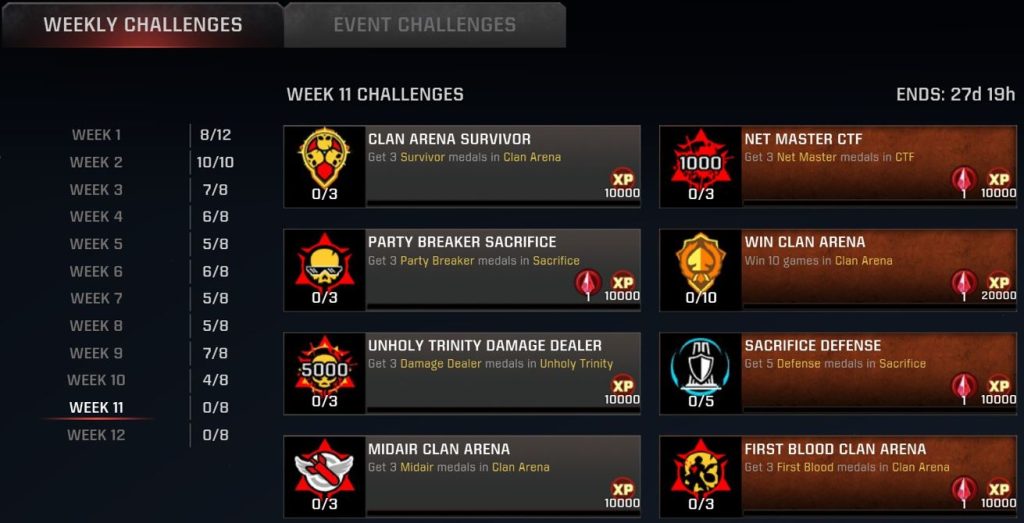 * Real quick an Update for Quake Champions will go out tomorrow morning at 10 AM EAST | 1400 PM CET. Servers will be down for this maintenance, so don’t be worried if you can’t log in for a little while.

Hello, and good evening Quakers! Season 13 is now in full swing at this point, and Week 11 of our weekly challenges are live. Several PTS updates have rolled out during this season, and it looks like some of those are being packaged for the LIVE server. In any case whenever that new update rolls to the main server the 25TH Anniversary Banners are going to be removed (so, take your screenshots now), Bots are getting smarter, and Perhaps the biggest change is the NailGun rework.

If you are not already familiar Quake Champions has 4 Seasons a year that also correspond with the Battlepass. Meaning we have 4 10 to 12 week long Battlepasses a year. Note the right side of the BP does not open up until you buy the BP. 27 DAYS REMAIN FOR SEASON 13.

The Czech Quake Community has made us a BattlePass Challenges Tracker over on their website: www.quake.pub Also check out their Tournament Calendar on the Right of their page, Live twitter feed on left, and newly added interviews in the center. The Quake Pub also shows Streamers for our community, and a Tournament Calendar that is kept current.

There are actually rewards after BattlePass Level 100. From 101 onward rewards repeat as 1 shard per level with a Reliquary Being rewarded every 10th Level until Level 200. (I only just now confirmed this again for this season. Takes time to get to 100.)

Champion Updates
🔹 Clutch air-dodge cooldown added
🔹 Clutch – Starting AP 75->100
🔹 Scalebearer – Added a 0-320 ups damage range for Bullrush so that below 320 ups hits deal 25 dmg instead of 0 dmg. (This is only during bullrush, still no passive damage below 400 ups.) This change is made as a quality of life opposed to a buff. It just doesn’t feel good when you trigger a Bullrush, hit an opponent, and 0 damage is dealt.
🔹 Scalebearer Forward Acceleration 0.75 to 0.5
🔹 Scalebearer – Bullrush Acceleration 170 to 150, Interruption Speed 240ups to 200ups

Misc Fixes & Changes
🔹 Allow new unidentified hardware detections to be set to ultra/high instead of med/low
🔹 CTF – once again schedule end-of-game after the final capture, but now with a 1 second delay, instead of none or 3.
🔹 UI – Decreased the length of the Ranking Up & Down animations
🔹 Fixed Galena pink armor shader
🔹 Fixed Anarki Pink shader
🔹 Texture quality fixed for all Lore Vanity items (Scroll 10)
🔹 Typo fix in weapon switch / railgun hint
🔹 Tips – Added a game tip about pain sounds.