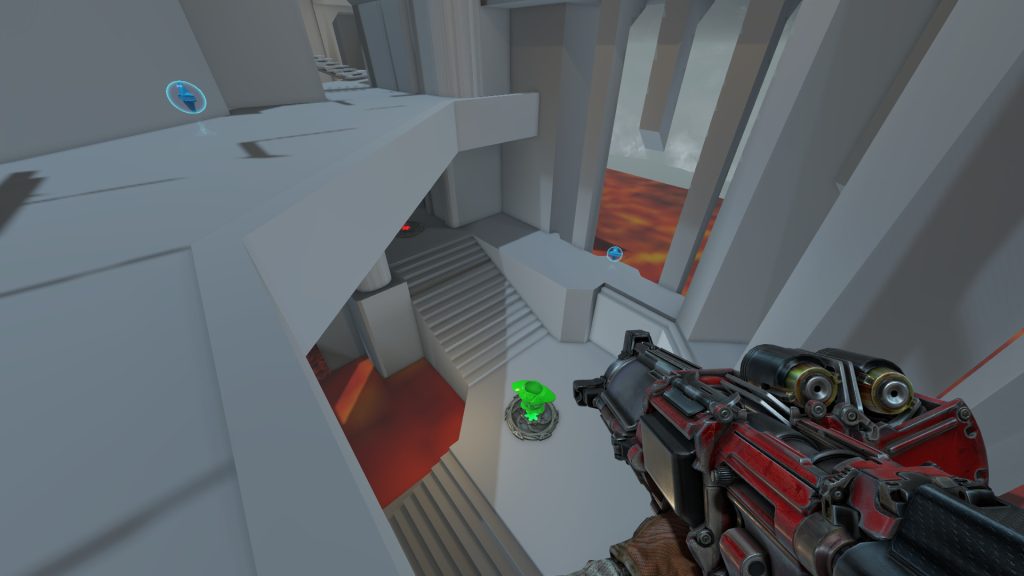 As an additional set of notes syncerror is giving Ranger Pure Gold Texture updates upon request. You’ll have to @syncerror on the Quake Discord to do this. Also more content is now expected to be added to the Pure Gold Bundle over time. I currently can’t find similar wording for the Pure Silver Bundle, but if this is all over time perhaps its just happening on a later PTS update down the rode. Crucible will appear in Blockout form. It will look tonally gray with little color outside the weapons & pickups available, and some lava spots. Blockout is typically the process of getting the geometry down where the “Player” can go. Once finalized the artists will then Texture the Arena with what we know it to be as a final product, or completed arena in this case. As the Arena is part of the Dimension of the Doomed (Goroth Elder God) we “may” have an idea of how its final product can look.

New Content:
🌟 Added Crucible – Blockout – Goroth Elder God of the Dimension of the Doomed – Duel Map – (Please test in TDM & DM for now. Duel spawns will not be setup until next week. 😢 )

Crucible Map Updates:
🔺 Added Duel spawns & game mode support
🔺 Added Clan Arena spawns game mode support
🔺 Slightly raised the ceiling barrier in the pit room between MH & HA
🔺 Slightly reduced the push of the pit jumppad towards MH (you can still reach MH and can still nail climb to TB)
🔺 Fixed the gravity on the angled jumppad from SG to SNG, it will push you higher up now
🔺 Slightly carved the ceiling of the hallway the angled jumppad lands towards
🔺 Removed the backwall of the HA Teleporter exit
🔺 Fixed the dropdown lava pool damage trigger
🔺 Moved power-up to the large lava pool between SG & HA (a health bubble still resides there in Duel)
🔺 Added a couple small rocks that can be used to climb out of the large lava pool (necessary for DeathKnight Champion in modes that do not support abilities and for bots in general)
🔺 Widened the upper narrow hallway that leads between TB and LG
🔺 Widened the dropdown to HA and narrowed the width of the upper dropdown walkway
🔺 Reworked the RG, lower light armor, and LG area, making it a larger connected area with lava.
🔺 Moved the LG Teleporter entrance into the new lava area near lower light armor
🔺 Made small collision improvements

Known Crucible Issues:
🗒️ The map isn’t textured. 🙂
🗒️ The pre/post game podiums aren’t well lit
🗒️ Peeker can shoot through some outer walls if you fly around corners. Solution — don’t.
🗒️ The trigger doesn’t work on the backside of the angled jumppad
🗒️ The lava trigger is too sensitive near the lower light armor
🗒️ The LG Teleporter if dropped into from the window or if you jump into the upper portion of the TP, will exit from a higher than expected point and you’ll miss the jump across to LG
🗒️ Getting out of the RG lava pool might be too difficult & punishing (you need to jump out not step out)
🗒️ Bots, while supported, do not work well yet, and cannot make certain jumps at this time

The PTS is a Public Test Server that many games come with. It is completely optional to be part of the PTS, and does require an additional download to take part of. The purpose of the PTS for us as Quake players is it allows us to preview upcoming skins, arenas, and gameplay changes in general before they are added to the Live Game servers. It also doubles as bug testing. In fact all bugs, or issues in the PTS should be put in the official discord in the “public-test-server” channel. If you can you should try and find a buddy to test with. Two heads are better than one. You can find people to party with in the “party-finder” channel.

Lastly, the PTS is not a representation of what will hit the Live servers at any time. As the values can be changed | reverted, or removed at any point during the PTS update period.