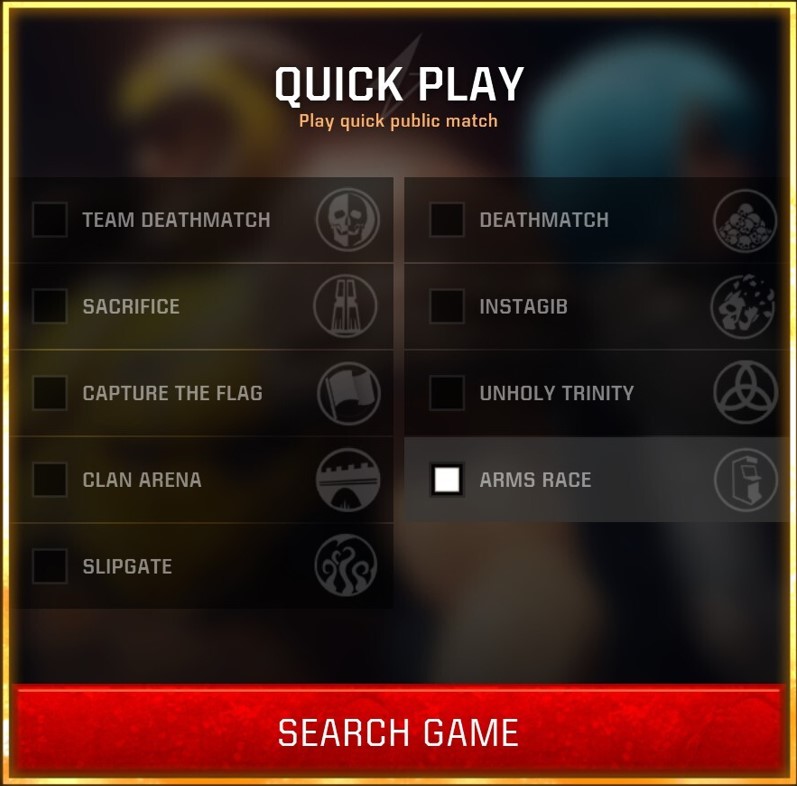 ARMS RACE is now available in QUICK PLAY. All you have to do is check it with the white box to add it to your Q. If you are not familiar with ARMS RACE it is very simple to understand. You are progressing through each weapon to get your final winning frag with the Gauntlet to win. This game mode ends at 36 frags. ARMS RACE is a great way to get exposure to guns you may not be comfortable with yet. Plus there is no self damage, so you can even try to practice jumps with the TRI-BOLT, & NAIL GUN. Practice really does make perfect in Quake. This event is time sensitive, and will end in 8 DAYS.

Get frags to earn the next weapon in the sequence:

In addition to this in one week’s time the PTS should be open. The PTS is a Public Test Server that many games come with. It is completely optional to be part of the PTS, and does require and additional download to take part of. The purpose of the PTS for us is it allows us to preview upcoming skins, maps, and changes in general before they are added to the main game. It also doubles as bug testing. In fact all bugs, or issues in the PTS should be put in the official discord here: discord.gg/Ay6kZxjm In the "public-test-server" channel. If you can you should try and find a buddy to test with. Two heads are better than one. You can find people to party with in the "party-finder" channel of the official discord. LINKED ABOVE.

If you want to access, or rather download the PTS you can do this on both Steam, and the Bethesda Launcher quite easily. Just to note though like other PTS downloads you are usually downloading the entire game plus some. The PTS download for Quake Champions is currently just over 30 Gigabytes. Keep that in mind if you want partake. Things that you accomplish in the PTS version DO NOT transfer over to the main game.

HOW TO PLAY Quake:

QC COMPATIBILITY TEST: churchofquake.com/trouble-shooting-crash-to-desktop-issues/ IF YOU ARE HAVING TECH ISSUES WITH QC LOOK OVER THIS LINK.

HOW TO WATCH The QUAKE PRO LEAGUE e-sport:

Doom is Dead? doomfederation.com/podcasts/ Partnership between Doom Federation, and In the Keep.