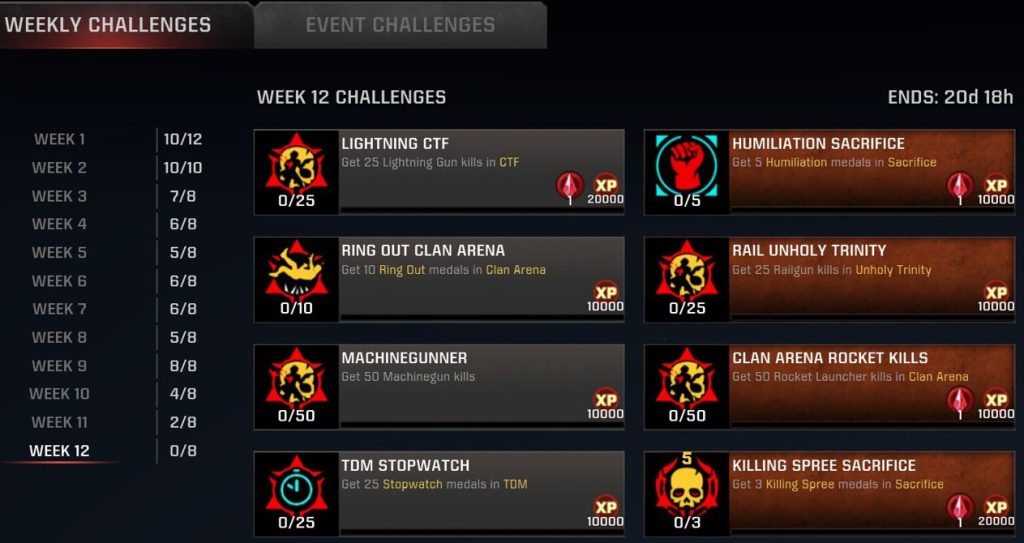 Hello, and good evening Quakers! Season 13 is wrapping up, and is currently scheduled to end next Tuesday. To be clear we could always get an extension, but no indication has been given a this point in time. If anything pops on the discord we will make sure to make an update post though. In any case the PTS already has a bunch of new stuff for you to try out early. I’ll leave the current stack of PTS updates expected to drop with Season 14 below. 2 New starting weapons are being added from Quake 2. The StepChild MachineGun, and Butterman ShotGun. In addition multiple Guns (like over a dozen) are getting Shader bundles in the store. So many other goodies are being added along with Season 14 check out the current list below. RIP to Scale 🙁

Haste Potions are still 50% off (150 Platinum) in the in game store. Haste Potions Triple all XP Earned for 7 Days. If you usually struggle to make it to level 100 each season picking one, or two up now may not be a bad idea. Note an automatic Haste Potion is rewarded to the player at level 30 of the BP. Haste Potion do Stack meaning you can have multiple weeks of XP boosts stacked at a time. Haste Potions are also not exclusive to one BattlePass. Meaning if a new season (14) started any reaming days would carry over for that new season.

The Czech Quake Community has made us a BattlePass Challenges Tracker over on their website: www.quake.pub Also check out their Tournament Calendar on the Right of their page, Live twitter feed on left, and newly added interviews in the center. The Quake Pub also shows Streamers for our community, and a Tournament Calendar that is kept current.

Game Updates:
🔹 Alphabetized the Datacenter list (which will group servers by region)
🔹 Reverted a lot of the Dec & Feb sound changes in an attempt to resolve some issues with dropped sounds and to try to get the sound back into a state that more seemed to prefer. Removed the elevation volume/pitch changes. Removed third-person weapon switch sounds. Reduced range & priority of third-person respawn sounds.
🔹 Clutch: Dodge cooldown reduced from 0.5 to 0.4 sec.
🔹 Scalebearer: Meh. Increased passive ground acceleration. Reduced interruption speed from 200 to 150. The acceleration value isn’t an attempt at a final value, was just the current value I had in testing when I had to press the button to make the build. It’s a buff over the last PTS build, which I don’t really like but everyone else felt the previous build was too nerfed, so maybe people will like this more.

Game Updates:
🔹Scalebearer: Some accelerations tweaks based on PTS tester feedback
🔹 Fixed the default hitbeep value in the config (it was mismatched with the correct default in code)