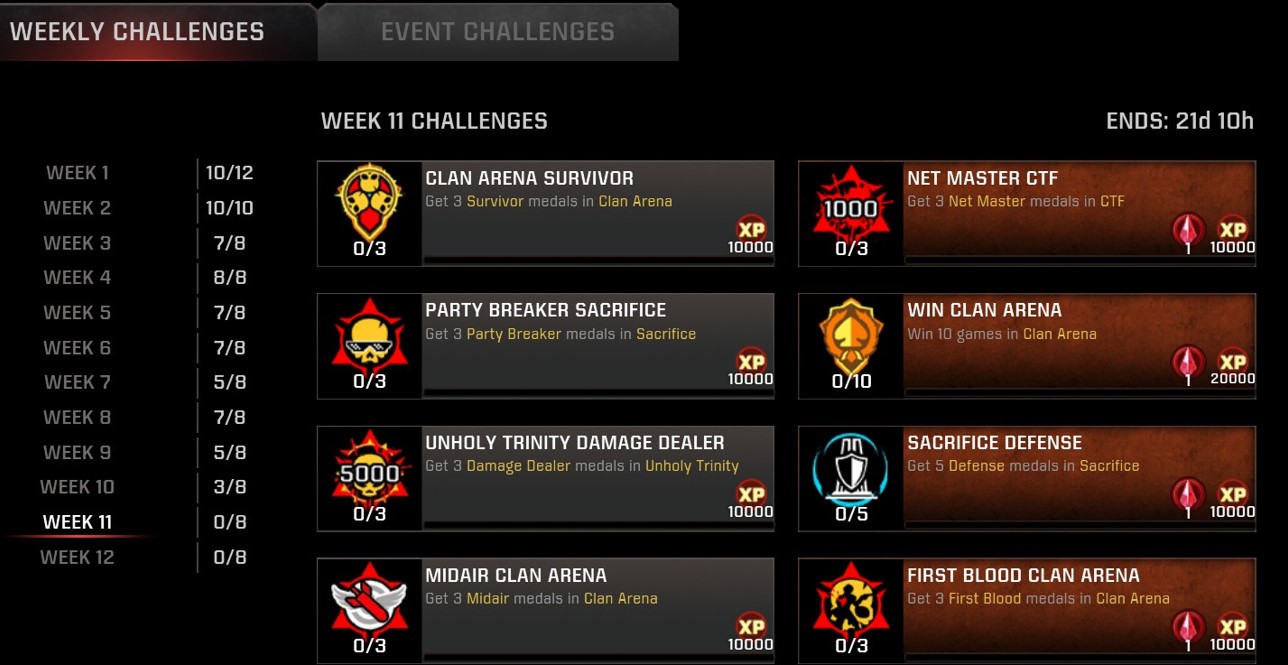 Good news everyone! The Public Test Server (PTS) for Fall/Winter is now live. This update currently includes our next arena "INSOMNIA", new game mode "IMPULSE 9", and two absolutely beautiful Weapon skin editions. One for the Rocket Launcher (Hell-raiser), and the second for the RailGun (Tormentor). Information on how to participate in the PTS, and see these goodies will be below. As stated in it’s name "public TEST server" everything you see and experience is not representative of the final product. The PTS, and the content in it will change drastically by the time it is officially brought into the main game with Season 12.

A new day, and a new week of challenges for us to accomplish. If you are not already familiar Quake Champions has 4 Seasons a year that also correspond with the Battlepass. Meaning we have 4 12 week long Battlepasses a year. We are currently at week 11. 21 DAYS REAMIN for SEASON 11. This week features 4 challenges in Clan Arena alone.

Hell-raiser – New vanity Rocket Launcher (wip, are these seriously representative of the final sounds in any way shape or form… uhh… you tell me?) Tormentor – New vanity Railgun (wip, no custom sounds, no custom fx yet)

Fixed crouch sliding sound effects from lingering after a Slash or Strogg dies while sliding
Clear ability fx at the end of the match. Fixes Peeker, Doom, Injection overlays for example.

You can check out this wonderful video from the "SHOOT 2 KILL" YouTube channel if you want a visual breakdown of most of new additions in this PTS update.

The PTS is a Public Test Server that many games come with. It is completely optional to be part of the PTS, and does require and additional download to take part of. The purpose of the PTS for us is it allows us to preview upcoming skins, arenas, and gameplay changes in general before they are added to the main game. It also doubles as bug testing. In fact all bugs, or issues in the PTS should be put in the official discord here: discord.gg/Ay6kZxjm In the "public-test-server" channel. If you can you should try and find a buddy to test with. Two heads are better than one. You can find people to party with in the "party-finder" channel of the official discord. LINKED ABOVE.

If you want to access, or rather download the PTS you can do this on both Steam, and the Bethesda Launcher quite easily. Just to note though like other PTS downloads you are usually downloading the entire game plus some. The PTS download for Quake Champions is currently just over 30 Gigabytes. Keep that in mind if you want partake. Things that you accomplish in the PTS version DO NOT transfer over to the main game. That said you can also demo stuff in the PTS that you may not own yet in the main game.

Have fun with the PTS FOLKS, and happy FRAGGING!

QC COMPATIBILITY TEST: churchofquake.com/trouble-shooting-crash-to-desktop-issues/ IF YOU ARE HAVING TECH ISSUES WITH QC LOOK OVER THIS LINK.

Doom is Dead? doomfederation.com/podcasts/ Partnership between Doom Federation, and In the Keep.