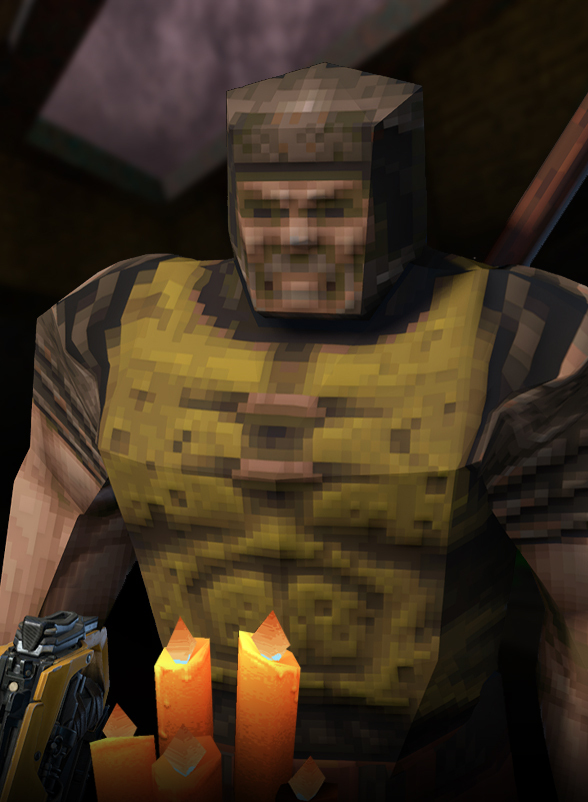 It is hard to believe Quake Champions came out 4 years ago today. As we turn the page to a new year lets reflect on the fantastic journey Champions has brought us on.

Quake Champions was first revealed by Tim Willits at E3 2016. Check out that glorious reveal trailer below. Perhaps the biggest change Champions brought to the Quake series are the Champions themselves. Every Champion can be played a slightly different way emphasizing Strafe mechanics from not only all main line games in the Quake series, but even some from the most popular mods over the years. Each Champion has a single ability that can be used in a number of ways to help change the tides of battle. Ranger’s "DIRE ORB" Even being a reference to the original 1996 Quake Boss Ending. On top of this each Champion has Passives that may allow them to be better suited for certain tasks in game. For instance Ranger’s passive allows him to block all self damage by a flat 75% making him ideal for rocket jumping, or abusing the NailGun in difficult situations. All of these Layers together have transformed Quake Champions into the most competitive FPS shooter on the market.

Quake Champions has seen lots of success as an e-sport as well. I personally am really into e-sports instead of more traditional sports/competitions. I started with Counter Strike Global Offensive (currently celebrating it’s 9th Birthday), and DOTA-2, but these games would not even have the success they have without the OG QUAKE games. To be clear e-sports was around well before Quake | DOOM, or id software were around. Atari technically sponsored arcade tournaments all the way back in the early 1970’s. Clearly what id software was doing with QuakeCon was decades a head of even Valve’s "The International". It may be hard for the younger audience to understand the difficulties e-sports had to overcome to get this point in our timeline. There was no twitch, or YouTube to piggy back off of like today. The internet itself was still a novelty even to the vast majority of the world’s middle class in the mid to late 90’s. But, those days are behind, and we certainly have a bright future ahead of us in e-sports.

Here is Tim Willits talking about Quake Champions as in e-sport back at the E3 2016 Reveal.

We finally got our hands on the Quake Champions BETA in spring of 2017. April 6th to be precise. Looks like I had access to the Champions BETA on the 19th of April 2017. In fact it was the reason I downloaded the Bethesda Launcher.

Quake turned 25 this year as a series. And, QuakeCon’s 25th Anniversary was also this year. We have so much to be thankful for. Bethesda/Zenimax has helped id Software transform QuakeCon into the best gaming convention to look forward to each year. It’s like Halloween, but better. This QuakeCon brought us The Quake Pro League Season 2 World Championship where Vengeurr become our new reigning Champion. Vengeurr is the clear winner, but going into this tournament so many of the pros were at the top of their game. I don’t think we have seen the scene this competitive ever. It was a true joy to watch the games this year. the games have not been posted yet on youtube, but should be posted in due time. In the mean time i’ll leave links to the twitch steams below.

Lastly you have less than 5 hours to complete the event challenges so, you might want to Q for those now. They must be done in Quick Play Mode.

I’ll leave us with a picture I found online from the original QUAKECON in 1996. We may not have been able to meet up again for this year’s event. But, lets hope that next year will bring us closer together.