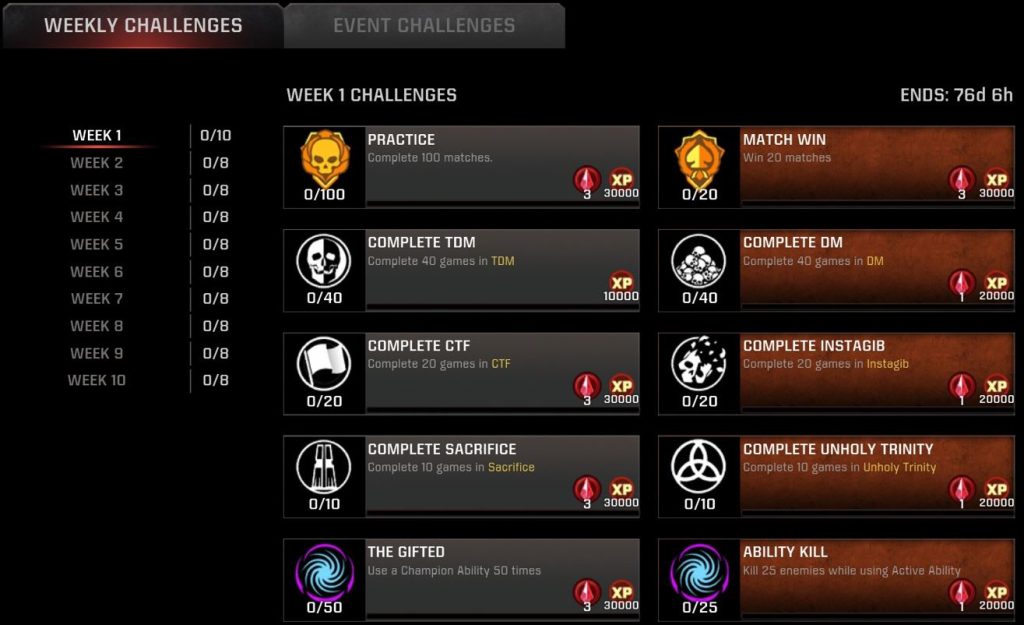 Good afternoon Quakers Season 14 has just released, and it is filled with all sorts of Spring goodies for you to collect, and find throughout the BattlePass season. 2 New starter weapons have been added. The Bitterman Shotgun, and the StepChild Machine Gun. A literal Mountain of basic shader skins have been added to many of the current weapons that have not had them added already (Like over a dozen). These are 500 Platinum a piece. Many other Vanity Skins have been added. Check out the complete notes below.

If you are not already familiar Quake Champions has 4ish Seasons a year that also correspond with our BattlePass. Meaning we have 4: 10 to 12 week long BattlePasses a year. Week 1 is primarily made up of completing basic tasks such as completing matches, playing specific game modes, or using your champion abelites. Note the right side of the BP does not open up until you buy the BP.

We are currently in the middle of Season 3 of the Quake Pro League (QPL) Make sure to catch the events live weekly on Quake twitch account. Saturdays at 11 AM EAST | 4 PM CET. Also catch live stats, and rankings on PGL’s (Pro Gamers League) website for Quake here. As the league is partnered with PGL, and Bethesda | ZeniMax.

The Quake community has been extremely active this year. Lots of community tournaments are open to all players in most regions, and some have weekly iterations as well. We have had several LAN ( in person for Quake) events with more planned to happen later this year. Exciting times to be a Quaker. make sure to follow our socials for more tournaments outside of the QPL.

Don’t forget to Q for TDM, CTF, Sacrifice, DM, Instagib, and Unholy Trinity this week, as everyone benefits from playing those games!

A new set of challenges opens up every Wednesday at 8:00 PM EAST | 2:00 AM CEST. The challenges are broken up in 2 parts. First their week, and then their side left side | right side. The left side consists of the free challenges you can obtain without buying the Battlepass. The right side is accessible after buying the Battlepass. The right side tends to be slightly harder, but gives additional XP as well as shards. Bot Games work as well for these challenges. 76 DAYS REMAIN FOR SEASON 14

You can buy the BattlePass for 1000 platinum. Platinum is the Premium currency in Quake Champions. If you are using steam I recommended buying from Bethesda directly at this link: bethesda.net/en/store/product/QUWV01PCBG01BASE

Once you have purchased the BP click the shield at the top of the screen, and hit the activate button that will be below the season 14 Name Plate.

Just a heads up you pretty much are getting an instant 7 day Haste Potion at level 2 with the paid version of the BattlePass. You also get another in the 30s level range

You can get 175 Platinum from the BattlePass this season. Sync has confirmed that the Level 101 onward awards have changed. Very curious what those changes are, but obviously have not leveled their yet. Shall update y’all when confirmed.

Spring is here, and it’s the perfect time to deck out your Champions with some lethal new accoutrements: new vanity items available in the Season 14 Battle Pass!

UI Updates
🔹 Alphabetized the Datacenter list (which will group servers by region)
🔹 Fixed Spectator Hint key in the UI not updating properly when resetting to default
🔹 Added a [!] after the video settings options that require a restart

Not sure where else to put it, so I’ll just mention it down here as it does technically effect us Quakers. While not mentioned in the notes it is expected that the Bethesda Launcher NOT BETHESDA ACCOUNT will start it’s shut down process next month, and is expected to be finalized by May of this year 2022. The Bethesda Launcher will have ALL games, and software packages migrated to steam (games like The Elder Scrolls 2: Daggerfall will be added to steam soon. at least that’s what their FAQ says anyway). This process does not disturb your games as all content made by a Bethesda | ZeniMax subsidiary studio is “usually” locked to your Bethesda account. For Quake you just need to make a steam account, Download Quake Champions, and sign in when prompted. You will then have access to Quake Champions on steam. Same Process for the Public Test Server (PTS). The exact means of how this will work has not been defined by Bethesda at this point in time. You can already link your steam account to your Bethesda Account on their website, but I have no direct reason to believe that will be how the migration process will work. That is how the free transfer of Fallout 76 from Bethesda Launcher to Steam worked a few years ago. In any case the Blog published by Bethesda has been updated on occasion, so read the blog for new updates.